I was struggling to make my Ubuntu box work with login server of ISP. It was not getting better at all. Sometimes after 50 attempts, ISP used to say yes and login window appeared. However I was totally annoyed by this. When I switch back to Windows, everything was fine. I started digging to the problem myself rather than asking ISP itself (just for fun and learning).

Let me come back to the problem of login server not responding. I struggled a lot. I thought the problem with wireless router and ISP may not be accepting the MAC other than my PC. No I was wrong, in windows everything was clean. Next, I pulled out wireless router and directly cabled modem to my PC. Again did not work out. I used to login from windows and work with Ubuntu for my net access. This was successful since login information was maintained in ISP side than locally in the system.

After so much of struggle, I decided to take packet captures of both windows and Ubuntu. I observed Ethernet packets and IP packets and they looked similar. Finally I gazed through TCP packets.

Aha here you are! Linux adds all TCP options to TCP packet while windows adds few. I knew this was problem but which options? I started disabling one by one

This did not work

Na this did not work. I thought my assumption was wrong. I decided to give final try

Hurrah!!! It worked out. I was really delighted. I updated the /etc/sysctl.conf and never faced the problem again.

So it is basically problem with tcp timestamp option which linux kernel includes by default. I really did not understand why this would give a problem. TCP timestamp just sends current clock of the system to avoid packets being recognized as duplicate during sequence number overflow. However they need not even synchronize with system clock. I raised this issue with ISP and let me see what happens further.

At the end of day, one more piece of learning and one more topic to write about ;). I just loved the investigations I carried out. It may be very silly problem to experts however for me it was seamless learning.

Here is the TCP packet capture of windows and linux. It shows Windows does not add TCP timestamp field in TCP packet during SYN state. 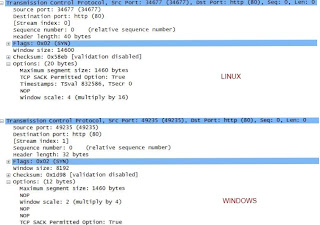 Courtesy: wireshark
Posted by Nanda kumar at 2:13 PM No comments:

When I was playing VLC, just wondering how pause, play and resume works. I decided to simulate one using pthreads. This is just done for fun nothing official. So I used the wait and resume calls of pthreads.

Using above two POSIX calls I did a simulation of player pause and resume. It worked as expected. So it was done as below

As far as wake up is concerned, there is one more variant pthread_cond_broadcast() which wakes up all threads waiting on condition variable. Please refer man pages to know detailed usage of pthread calls. Not sure about internals may be the futex is released atomically and wakeup** is called for this task (again not sure)

Here is C code, not completely tested however giving what is required. Suggestions and further improvements are always welcome.

static int stop_player(struct player *__arg)
{
/*
* This may hang the thread if the player is paused.
* We will have to explicitly do signal in case, player is paused
*/

The new version of virtual box seems to have improvements on the native graphic resolution. My guest OS screen now fits into entire screen of host OS rather than it was limited to a specific area in earlier versions. This was happening even if  guest add-ons were installed. The problem seems to have gone by now. Now I am getting real feeling of linux box on vista without installation of guest additions. I recently installed OpenSUSE 12.1 32 bit edition with XFCE desktop as guest on top of Vista and looks magnificent. Here are some screen shots


That really looks nice. Of-course this was only for experiment. Personally I use linux installed onto the hardware system :-).
Posted by Nanda kumar at 7:56 PM No comments: